This post is based on a lecture I gave to my Property Law class a few weeks ago during Poverty Awareness Week. I figured I'd dust it off because a recent story out of Fort Lauderdale, Florida, has received a lot of attention in the last couple of days. So I'm going to start with a few comments, move on to Fort Lauderdale, and then bring it back to Canada and the Canadian Charter of Rights and Freedoms. I'll be dealing primarily with the use of public spaces by or for the benefit of the homeless - panhandling; distribution of food; the use of parks.

Now, I hasten to add that while I teach first-year property law, I don't consider myself an expert in the field, nor am I by any measure an expert on homelessness or poverty. But regardless, the law as it relates to homelessness and the use of public spaces by the poorest among us is a fascinating topic and it raises significant political, legal, and public policy questions about what kind of society we want to live in, and how the law shapes that society.

Let's start with the famous quote by Anatole France in his book The Red Lily:

“The law, in its majestic equality, forbids the rich as well as the poor to sleep under bridges, to beg in the streets, and to steal bread.”

As in many areas of the law, "equality" isn't always all that "equal". Just as (for instance) a restriction on strikes affects unions significantly more than a restriction on lockouts affects employers, bylaws that restrict the use of public spaces for sleeping, eating, panhandling, and so on obviously affect the homeless far more than they do those of us with homes to go to. As Jeremy Waldron notes in his article "Homelessness and the Issue of Freedom" (1991), 39 U.C.L. Rev. 295:


…[E]ach of us has at least one place to be in a country composed of private property, whereas the homeless person has none....

On a less elevated level, who can forget the recent furor over a post by Chris Beavis, co-owner of Winston's Pub in downtown Saskatoon, that many in Saskatoon took as targeting the homeless? 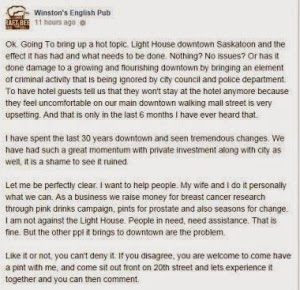 Which brings us to the latest headlines. Fort Lauderdale, like some other American cities, has passed a bylaw that restricts where people can feed the homeless. Specifically, you're not allowed to feed homeless people within 500 feet of residential properties (which I assume includes downtown condos, for instance), and you can have no more than one food site per city block. 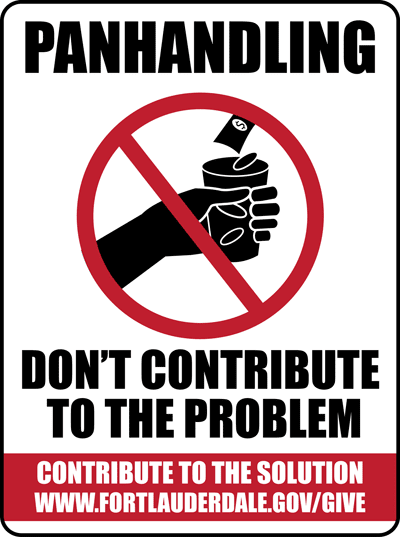 (One of several signs that were part of a previous campaign by Fort Lauderdale to discourage panhandling. Fort Lauderdale spent over $26,000.00 USD on the campaign. You can still see similar signs gathering dust in some Saskatoon business' windows, for that matter.)

Recently, Arnold Abbot, a 90-year old advocate for the homeless, and two Christian pastors were charged with violating the Fort Lauderdale ordinance by setting up a table and distributing food to the homeless, as they had done for years. Coverage has been extensive, including by the CBC, the Independent, heck, even by Fox News.

(From the Independent, link above. Seriously, he's 90 and he's been feeding the homeless in the name of his deceased wife since 1991. And now he's facing up to 60 days in jail.)


Unfortunately I haven't been able to track down the actual language of the city ordinance (bylaw), as Fort Lauderdale's online list of ordinances is currently only to September 5  at the time of writing. However, it appears that this is only one of several ordinances recently passed by the city which have the goal of removing homeless people from public view. These include restrictions on "camping" (preventing people from sleeping or eating in a public space with their belongings) and allowing the City to confiscate the belongings of a homeless person if that person doesn't pack up their things.

Fort Lauderdale's ordinances, like those in other U.S. cities, extends beyond what we have in Saskatoon. But Saskatoon, just like every other city in Canada, does regulate activities by people in public spaces. For instance:

Our Bylaw also restricts the venue - where you may panhandle (s. 6): you may not panhandle within 8 metres of the doorway to a liquor or beer and wine store; nor can you panhandle within 10 metres of an ATM, a bus stop, a bus shelter, or a doorway to a bank, credit union, trust company. Why 8 m for a liquor store, but 10 for a bank? Who knows? Why these particular types of businesses? In the case of banks, credit unions, and ATMs, it's probably because by definition people are going there to deal with money - so it would be prime panhandling turf.

(Many cities have similar restrictions, but not identical ones. The City of Kamloops, for instance, has the same restrictions as Saskatoon but adds that you also can't panhandle within 10 ms of a movie theatre, church, or place of worship; also that you can't panhandle after sundown.)

Similarly, we have The Recreation Facilities and Parks Usage Bylaw, 1998 (Bylaw No. 7767) that restricts the use of parks. Like Anatole France and Jeremy Waldron would not doubt point out, many such restrictions are not really restrictions for those of us who have other homes to go to; we'll never need to worry about violating them. I'll mention two specific restrictions:

These restrictions are notable because the City of Victoria had similar restrictions in their parks bylaw. The City repealed the restrictions on sleeping in parks, but its bylaw still prohibited temporary structures. That prohibition on temporary shelters was ruled unconstitutional in Victoria (City) v. Adams, 2009 BCCA 563. In Adams, the number of shelter beds were wholly inadequate compared to the numbers of homeless people (anywhere from a quarter to a third of the city's homeless could get beds on a given day). The B.C. Court of Appeal ruled that because (a) being outdoors without adequate shelter at night and/or in inclement weather was a health risk and (b) anywhere from two-thirds to three-quarters of the city's homeless would not be able to access homeless shelters, it violated the Charter rights of the homeless to life, liberty, and security of the person. (Section 7 of the Canadian Charter of Rights and Freedoms.) 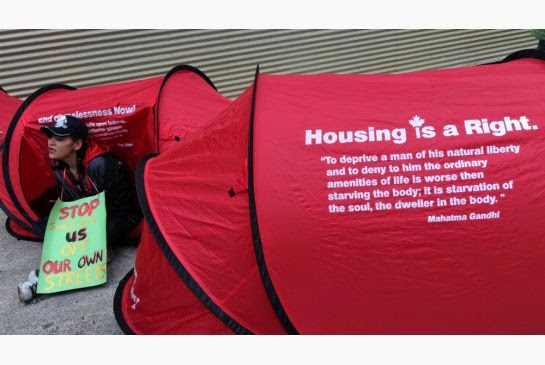 (Mark Ralston/Getty Images from here. The "Red Tent" campaign was started after the Adams decision to highlight homelessness in Canada.)

Note that the decision does not go so far as to guarantee a positive "right to shelter" in Canada. It speaks only to a "negative" right not to have one's efforts to make shelter interfered with. And even that is somewhat limited; I think Adams is an important case, but I think its potential application is actually quite limited.

Is Saskatoon's bylaw similarly unconstitutional? It would depend very much on the number of homeless people in the city, and their access to shelters, in my view. The Adams decision is based heavily on the number of homeless people vs. the number of available shelter beds. A restriction on temporary shelters in parks would not, in itself, be automatically unconstitutional, by this reasoning; someone would have to show (as in Adams) that many of Saskatoon's homeless citizens have no realistic option but to sleep outside. And Saskatoon's weather is a lot more extreme than Victoria's.

The City's 2011 report on homelessness in Saskatoon suggested that at the time there were around 287 emergency shelter beds in the city, as well as 387 "transitional housing facility" (longer-term housing) units, and 4,800 "supportive housing facility" units. A "snapshot" survey from 2008 in the same report counted 260 homeless people (p. 4) but notes that it is estimated that for every one homeless person seen on the street, there are four that are "hidden" - people who couch-surf, who live in cars or abandoned buildings, and so on. But regardless, it would seem - at least on the face of it - that the number of homeless people vs. the number of available shelter spaces is not so dire here as it was in Victoria in 2009.

(And as an aside, the B.C Supreme Court recently granted an injunction to evict homeless people who had set up camps in a Vancouver park. While the section 7 Charter argument wasn't before the Court at this stage, the Court did consider the availability of shelter spaces and accepted that the number of spaces were "roughly commensurate" (para. 43) to the number of people in the park.)

What about bylaws like the one recently passed in Fort Lauderdale? Those would probably be constitutional, too, here in Saskatoon. To satisfy the test set out in Victoria (City) v. Adams, you'd have to establish that homeless people had no other realistic option to feed themselves - that soup kitchens, shelters, and so forth were not up to the task of keeping people from starvation.

But in the end, property law isn't about "things". It's about rights, and that means it's about power. The ability to exclude citizens, including homeless citizens, from public spaces; or to restrict what they can do there; brings the political aspects of law into full view. Just because something is constitutional or legal does not mean it is just.

“Everyone has the right to a standard of living adequate for the health and well-being of himself and of his family, including food, clothing, housing and medical care and necessary social services, and the right to security in the event of unemployment, sickness, disability, widowhood, old age or other lack of livelihood in circumstances beyond his control.”

Our Charter (unlike some constitutional documents, like s. 26 of South Africa's Bill of Rights) includes no right to housing. (It doesn't include a constitutional right to property, either, but that's a whole 'nother kettle of fish.) The courts can provide perhaps some limited recourse for the homeless through constitutional litigation or other legal avenues. But when it comes right down to it, the law is what we make it, and it is no answer to simply say "it is the law." It is we, as citizens, through our elected officials, who define the type of society we want.
Posted by Unknown at 13:13 No comments: