Alberta's farm industry will soon join the 21st century and farm workers will gain a variety of rights they did not formerly hold, including protection under occupational health and safety legislation, the ability to bring workers' compensation claims, and the right to unionize under Alberta's labour relations legislation.

These changes are contained in Bill 6, The Enhanced Protection of Farm Workers Act, currently before the Alberta Legislature. The Alberta government's summary of the changes can be found here. Jennifer Koshan of the University of Calgary provides an excellent commentary here (including numerous useful and illustrative links) on ablawg.ca.

The opposition Wildrose Party, predictably (it's their job to oppose after all), takes issue with the changes, insisting that "proper consultation" must take place - though they don't suggest what they might do differently in terms of farm workers' rights (other than, one supposes, not changing anything from the status quo).  The party appeals to nostalgia for the "family farm", despite farming becoming increasingly industrial and centred around large operations.

Now, I'm not addressing one way or t'other whether 45 days is sufficient time to consult on these changes, either practically or constitutionally. But extending OH&S protections to the farm industry, at least, is not a new issue. Judge Peter Barley of the Provincial Court of Alberta, in a 2009 public fatality inquiry, recommended that OH&S be extended to paid farm workers, Alberta being  the last province in the country to grant those protections. Former Alberta Premiers Ed Stelmach and Alison Redford both promised to do so, but didn't deliver.

The other changes involve workplace provisions that are less universal across Canada; Ontario agricultural workers, for instance, have only limited rights to unionize under the anemic Agricultural Employees Protection Act; Saskatchewan farm workers have access to trade union legislation but aren't covered by workers' comp. Occupational health and safety coverage for farm workers, at the very least, would be a good first step - though extending only that protection does have some potentially interesting ramifications on workers' comp, depending on funding formulas, as set out below. Nonetheless, the coming changes (which may still change based on the consultation process) aren't new when one looks across the country.


MEANWHILE, BACK IN SASKATCHEWAN...

Unlike Alberta, Saskatchewan farm workers are covered by occupational health and safety legislation - we don't have an exclusion for agricultural workers under Part III (OH&S) of The Saskatchewan Employment Act. Similarly, agricultural workers aren't excluded from the labour relations portion (Part VI) of the SEA, so they can certify a bargaining agent (i.e. unionize) under the SEA like other workers.

But  Saskatchewan can't be too smug in this regard. The Saskatchewan Employment Act still excludes farm workers - specifically, under s. 2-3, "those employees whose primary duties consist of actively engaging in farming, ranching or market gardening activities" - from most of its labour standards provisions, including those relating to overtime, vacations, and hours of work. (This exclusion, notably, doesn't apply to some of the more "industrial" types of agriculture such as egg hatcheries, greenhouses, commercial hog operations, and bush clearing - s. 2-3(2).)


This Act applies to all employers and workers engaged in, about or in connection with any industry in Saskatchewan except:

(a) the farming or ranching industry...

This is despite a 2011 report commissioned by the government that recommended that agricultural workers be included under workers' compensation; or, rather:


Recommendation 1: The Workers' Compensation Act, 1979 apply to all employees in Saskatchewan with no exclusions. (p. 10)

When The Workers' Compensation Act, 2013 replaced the 1979 Act, however, the exclusion remained. Farming and ranching employers can choose to join the scheme and pay in to workers' compensation, but they're not required to. (And I suspect uptake is quite low; one article suggests that  voluntary WCB coverage in Alberta's agriculture industry is only about 3.3%.)

There are, by the way, a large range of workers who remain excluded from our WCA, as set out in The Workers' Compensation Act Exclusion Regulations, 2014. This includes such diverse industries and occupations as commercial fisheries, dairy farms, clergy, circus performers (!), door-to-door salespeople, "sports players" and, needless to say, academics. For some, there may be easily identifiable reasons. But for agricultural workers, it seems to be mostly historical - despite the fact that, as the 2011 report mentioned above states at p. 8:


It's not all one-sided, naturally. WCB coverage means that farming operations who employ workers  will need to pay WCB premiums, though those premiums are tax deductible. Interestingly, in 2011 at least, the OH&S department was funded through Workers' Compensation. In other words, agricultural workers received the same protections under OH&S as other workers, but their employers did not have to pay WCB premiums and, therefore, didn't contribute to paying for those OH&S protections. I must admit I don't know if this funding formula has changed, but it's another interesting wrinkle. The Committee of Review, again, at p. 8:


OHS does try to provide some safety services in this excluded sector and spends over $50,000 per year on a media campaign and safety guide for agriculture and ranching. However, the high injury and fatality rates imply limited effectiveness for these efforts, the cost of which, like all OHS expenditures, is borne entirely by employers’ premiums in WCB covered industries. Many employers in agriculture do not pay for any of the publicly delivered safety or prevention services they receive. The high injury and death rates indicate that more such services are needed. Employers now covered by WCB should not be asked to pay for services in sectors that do not themselves contribute. This creates the perception of unfairness.

Furthermore, as an employer, if you're not covered by workers' compensation legislation, injured workers can sue you if the injury was a result of your negligence. This is the trade-off under the so-called "Meredith Principles", upon which workers' compensation is based: employers collectively  share the cost of funding the compensation system, in exchange for being immune from potentially damaging lawsuits and court actions in the event of a workplace injury. Now, it's possible that there may be liability insurance available, and maybe farm employers are content with the fact that litigation is expensive enough that most people won't sue. But, again, this isn't an easy or one-sided question.

And, finally, exclusion under the WCA isn't tied to the size of the farm. It doesn't matter if you're a small family operation or a massive farming concern.

However, I think it's safe to say that the question of workplace rights for workers is not as simple as "big government vs. the family farm".

That said, there are certainly those who do think this is "big government vs. the family farm" or even "unionized workers vs. the family farm". I would be remiss if I did not mention that, in addition to its stated concerns about consultation (which may have some validity), the Wildrose Party has engaged in the expected anti-union histrionics. Said Wildrose Party MLA Wayne Anderson:


"It's very disappointing that they have not gone out to the stakeholders and had conversations with the farmers and the farming community. It's really unfortunate because they've gone to their union people first, and asked them about it. And of course the W-C-B (Workers Compensation Board) and the O-H-S (Occupational Health & Safety) are looking to add more to their payroll, you know more unionized employees, but unfortunately the farmers and the farming community has yet to be included in any conversations with this government." 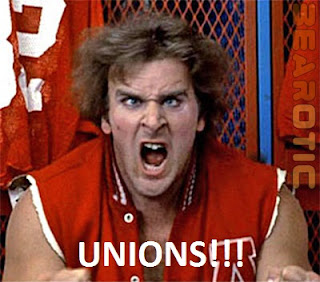