Unions on the Hill 2: Union space and parliamentary bylaws

Right, so. Last time I discussed the prevalence of "union space" clauses in collective agreements. I also mentioned that the Liberals and Conservatives believe - or say they believe, at least - that such a clause runs afoul of Parliamentary bylaws preventing the use of caucus space for the "benefit" of a person or organization.

For reasons that follow, I think the Liberal and Conservative argument here is nonsensical. To interpret the provision as strictly as these parties suggest would disallow any number of otherwise entirely proper uses of caucus offices.

Now, again, I'm not suggesting that one can cloak otherwise illegal or improper activity under a "union space" clause. But I've seen no evidence presented that UFCW Local 232 or the federal NDP are doing anything improper with the office space granted - other than, apparently, granting it in the first place.

The Language in the Bylaw

Recall the Bylaw itself:


If we take the Liberal and Conservative interpretation of the Bylaw, the Bylaw serves to prevent any union space clause being in any collective agreement on the Hill. It wouldn't just prevent a union office. It would, using this same reasoning, prevent a union bulletin board (that's using "premises" for the "benefit" of a person (the workers) or an association (the union), after all) or, for that matter, preventing union representatives from meeting with their members within the workplace at all (again - using "premises" for the "benefit" of the workers within the workplace).

For that reason alone, in my view, the Liberal/Conservative line here is absurd. The intention of the Bylaw is to prevent influence-peddling and diversion of Parliamentary resources for private benefit. UFCW 232 - that represents federal NDP office staff - has its own offices off the Hill. The Local represents staff of the federal NDP across the country - not just in the House of Commons.

But it goes further. What about, for example, occupational health and safety committees, which employers are required to maintain under the Canada Labour Code? If they meet within the offices of the party, isn't that using "premises" for the "benefit" of people working in the workplace? (Lest you think the comparison is a stretch, keep in mind the Code also imposes statutory requirements upon employers, such as requiring them to abide by collective agreements and to recognize and bargain with their employees' union of choice.)

Union representation is - or should be seen as - just as much a part of the legal landscape of working life as is occupational health and safety legislation. But the Liberals and Conservatives (neither of whom, of course, have unionized staff) seem to view a union chosen by a group of workers as somehow foreign; unwelcome; improper. And the interpretation these parties put forward regarding this parliamentary bylaw seems far too narrow and completely misses the logic and purpose of labour relations in a unionized workplace.

I mean, really, it seems to keep coming back to our old friend Ogre. 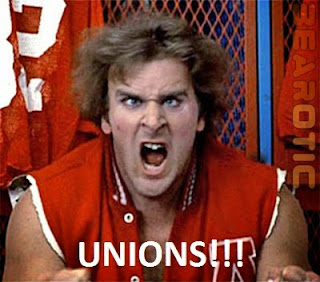 What about the Charter?

Following Mounted Police, Saskatchewan Federation of Labour, and B.C. Health Services, labour rights have finally been granted "constitutional benediction" - to borrow a phrase from Justice Abella in Saskatchewan Federation of Labour. Surely preventing a union from meeting with its members, maintaining a bulletin board, or having an office within the workplace - all of which would contravene Parliamentary bylaws, if you believe the Liberals and Conservatives here - must violate the Charter?

Well, yes, probably. While it could certainly be argued that workers can engage in "meaningful collective bargaining" without a union space clause, I think the stronger argument is that the message forbidding union space sends - telling workers that their union is not allowed to communicate with them within the workplace - is a much greater affront to labour rights than it might at first appear.

But that's not the end of it. Because we're talking about a union space clause in the House of Commons, we have to deal with the question of Parliamentary privilege - the idea that Parliaments and Legislatures can make certain decisions without fear of judicial review. So, for instance, the right of a Legislature to forbid television cameras was not subject to review by the Courts. Parliamentary privilege is not unlimited, but it extends pretty far - to anything necessary for the functioning of Parliament. Labour relations may well fall under that category - meaning that the Charter might not apply if Parliament chooses to forbid union space clauses.

This isn't a topic I feel particularly qualified to write about, so I'll just say that Parliamentary privilege might apply here. But as one constitutional scholar I canvassed noted, it's not the end of an issue just because that issue's not subject to Charter analysis. Hopefully sound labour relations policy and sensible politics will prevail in this case.

So last time I wrote a bit about "union space" clauses, and... 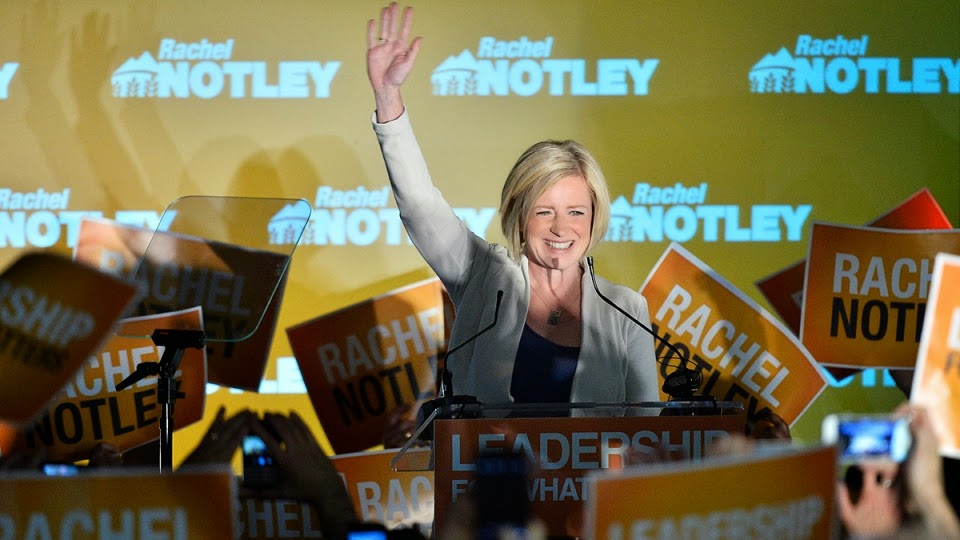 The New Democratic Party of Canada's political staff is unionized, and the employer (i.e. the NDP) provides office space for their staff's union, pursuant to a collective agreement between the parties - what I'll call a "union space" clause. It doesn't appear that extra office space is granted by Parliament for this purpose - the union office seems to be within the Leader's office space - though I stand to be corrected on that point. And this is only an issue for the NDP, as none of the other parties (including the Greens and the BQ) have unionized staff.

The federal Liberal Party's house leader, Dominic Leblanc, takes issue with this collective agreement clause, saying a union space clause somehow "blurs lines" on the Hill. The Conservatives have piled on, filing a complaint with the parliamentary Committee on Internal Economy (the meetings of which are generally held "in camera"). Several unions have fired back in response to the Liberal and Conservative criticism, as has the NDP itself.

It all combines to make this sound very controversial. From a labour relations standpoint, it isn't. Union space clauses are incredibly common. I'm more surprised when a collective agreement - regardless of the employer - doesn't have a union space clause of some sort.  But that is, of course, not the whole story. We have to consider Parliamentary bylaws and, possibly, the question of Parliamentary privilege. But that's for next time.

For today, we'll deal with the labour relations aspects of this tempest in a teapot.

The relevant clause of the collective agreement in question, between the federal NDP and its parliamentary staff, apparently reads as follows:

I say "apparently", by the way, simply because the collective agreement isn't readily available online, as far as I can see, so I'm quoting from the CTV news story linked above.

NDP national staff used to be represented by the Communications, Energy and
Paperworkers Union Local 232.  They're now represented by United Food and
Commercial Workers, Local 232 (from ufcw232.ca).

This shouldn't even be an issue. It's very common for unions to negotiate "union space" clauses in their collective agreements. In some cases, it's merely a bulletin board that's to be used exclusively for union postings, such as in this collective agreement between SEIU-West and Canadian Blood Services:

18.01The Employer shall provide the Union with a bulletin board for the exclusive use of the Union. This bulletin board shall be placed so that employees covered by this agreement shall have ready access to it. The Union shall have the right to use this space to post notices of meetings and any other notices as may be of interest to the employees. All notices posted shall bear the signature of a Union official.

In others, as with my own union (the University of Saskatchewan Faculty Association), it extends to office space and meeting space:

10.5.2 The Employer shall provide the Association, free of charge, with suitable meeting rooms on the Employer's premises for the conduct of Association business subject only to normal scheduling requirements and the payment of any extra costs that may be incurred in making special arrangements

(That's from our last Collective Agreement, found here if you're interested; but the current version has similar language.)


Or it can include both, as in this agreement between the Canadian Union of Public Employees and Saskatchewan Association of Health Organizations:

37.07 The Employer(s) shall provide bulletin board(s) which shall be placed so that all Employees will have ready access to them and upon which the Local of the Union shall have the right to post notices of meetings and such other notices as may be of interest to the Employees.


The reasons for such clauses are pretty obvious. They allow the union to communicate openly and freely with union members in the workplace. It's also a recognition that the union has a right to be there; that the workers' choice to be represented should be respected by the employer. And of course once it's in a collective agreement, the employer is contractually obliged to comply with the clause.

A union's use of bulletin boards and union space isn't unlimited - you can't hide behind a union space clause if you post defamatory material, for instance - though unions are generally given some latitude in how they choose to use them.

(Indeed it's common for union staff to have their own union (COPE 397 also represents staff at the University of Regina Faculty Association as well as staff at Service Employees' International Union here in Saskatchewan; staff at SGEU were represented by the Communications, Energy, and Paperworkers Union, Local 481 - now represented by UNIFOR 481, following a merger of the CEP and the Canadian Auto Workers).)

And that's an important point, I think. NDP staffers and union staffers may work for union-friendly employers (ostensibly), but they are still workers and employees. They can have disputes with their employers, just like in any workplace. They sometimes need help with harassment complaints or workplace conflicts, just like in any workplace. They may file grievances. Sometimes they go on strike (for example staff at the Saskatchewan Government Employees' Union struck in 2007; there was some suggestion back in 2010 - though I haven't found further confirmation beyond a single "scuttlebutt" news article - that B.C. NDP constituency assistants took a strike vote in 2010).

When they unionize, these workers and employees get the same rights (subject to some limitations such as essential services legislation) as every other unionized worker - to organize, to collectively bargain, and to strike, as we saw in Mounted Police Association, B.C. Health Services, and Saskatchewan Federation of Labour - which includes the right to, if they choose, collectively bargain for union space. That's true whether the union is public or private; whether the employer gets its funding from government or not.

And I'm not suggesting union space clauses are, or should be, somehow mandatory; only that it's problematic to forbid  a union and employer from negotiating one.

Notably, there doesn't seem to be any suggestion that either UFCW Local 232 or the NDP have used the office for improper purposes. Rather, the Liberals and Conservatives are complaining that the union has union space within the workplace at all. This is also an important point, as I don't wish to be seen as giving either the union or the employer carte blanche to do whatever they want with the space. I'm assuming here that the office is used for exactly the purpose intended - to facilitate union communication with and representation of its members within the workplace.

But that's not the end of the issue. In labour relations a "union space" clause is entirely uncontroversial. It shouldn't be controversial here, either, in my view, but the Liberals and Conservatives believe (or at least they are alleging) that this violates a clause within Parliament's member Bylaws:

...And that's what I'll be addressing next time.