SFL v. Saskatchewan predictably sparked a lot of discussion. This post, by the way, was written - more or less - a couple of weeks ago. So time has marched on, and this post is therefore a bit dated, but rather than discard it I figured I'd post it anyway.

Steven Barrett and Ethan Poskanzer at Sack Goldblatt Mitchell, a union-side labour firm, reviewed the decision and  suggest in conclusion that

The majority opinion, firmly rooted in Canadian labour history, international law and Canadian constitutional jurisprudence, will no doubt have ripple effects for many years to come.

Omar Ha-Redye, a lawyer in Toronto, reviewed the decision and suggested that the language of the majority in SFL doesn't necessarily mean a right to strike per se but, rather, a right to a meaningful dispute resolution mechanism. That might be a strike, but it could be something else.

David Doorey, in his article I referenced last time, mentioned a lot of the questions that remain - what does this mean, if anything, for those in the private sector or not in a union at all? Or for public sector workers excluded from labour legislation? Or for Ontario agricultural workers who, in Fraser, were told they didn't have a right to any particular dispute resolution process - but a strike (said the Supreme Court) would qualify as just that?

Murray Mandryk at the Regina Leader-Post stated that this is a loss that Premier Wall should take seriously.. In an editorial, the Leader-Post took the position that an essential services statute was necessary, but that the government had rushed into things.

Premier Wall, of course, followed up his "hey, look, football!" joke which I mentioned last time with a comment that the government was considering using the "notwithstanding clause" in order to pass legislation that violated workers' constitutional rights - despite the fact that even after the SFL decision,  you can still have essential services legislation, you just have to craft it a bit better than was done last time.


Meanwhile,, I appeared very briefly on John Gormley Live, a local radio talk show, to discuss the SFL v. Saskatchewan case. John is no friend of labour, but he's very personable and I don't think I came across as too much of a stumbling boob, so I'll call it a win.

The guest immediately before my segment was John Mortimer, president of LabourWatch, a non-profit, anti-union organization whose membership is anti-union employer groups and management-side law firms. LabourWatch's website is all phrased in carefully neutral language, but once you scratch beneath the surface and notice code like "being union free", their gleeful posting of decertification applications where their name is mentioned, the fact that there's no comparable information there on how to become unionized, and, well, the fact that its membership is anti-union employer groups and management side law firms, makes it pretty clear that LabourWatch isn't really about balance or "informed choices".

(Frankly, I'm not sure why Mr. Mortimer and his group think their odd form of "help" is needed. In 2014, only around 30% of Canada's non-agricultural paid workers belonged to unions, but that's a bit misleading in itself because the number in the private sector is much lower - around 17%, as Justice Rothstein noted in his dissent in SFL - but in the public sector the rate's around 70%, hence the overall 30% unionization rate. But apparently 30% is still too high for LabourWatch, and on and on we go.)

Anyway, Mr. Mortimer seemed notably angry during his appearance. Because unions. You know how it is. 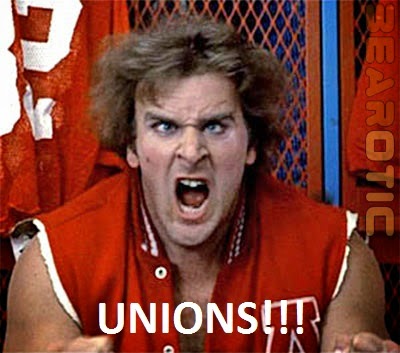 (I picture LabourWatch's reaction to SFL being kind of
like Ogre in Revenge of the Nerds.)

Yet during my few minutes of fame rambling, I opined that the implications of SFL really aren't that huge in terms of Canadian labour legislation overall. It's huge for the public sector, of course. Essential services legislation across the country will need to be reviewed and there may be Court challenges. Return-to-work legislation, where the government passes ad hoc legislation to order strikers back to work, may be subject to challenge. Maybe even common law injunctions against strikes may be more difficult to obtain with a constitutional right to strike in play.

But I don't think SFL opens the door to widespread re-working of Canadian labour law. I don't fully agree with my friend Greg Fingas who suggested:

Meanwhile, some question will also arise as to the new rules setting limiting the availability of job action under the Saskatchewan Employment Act, SS 2014, c S-15.1 ("SEA"). While the SEA's restrictions are primarily process-oriented, they too might run afoul of a substantial impairment threshold - both in general terms, and particularly if they prove unduly onerous under the circumstances of a particular planned strike.

Or at least - I agree the question might be raised, I just don't think a challenge would be successful. The Court in SFL has admittedly made it clear labour law is all about trade-offs; if you infringe on a union's right to strike or collectively bargain, there should be some alternate process, such as binding arbitration, in place. But the amendments to The Trade Union Act were held not to offend the Charter of Rights and Freedoms. In my view the Court has made it pretty clear that it's just not that interested in micromanaging government labour policy. And some of the requirements under the SEA - like mandatory mediation or conciliation - have been present in the modern Canadian model of labour relations since the 1940's. Not every labour relations statute has it or has had it, but it's not like this is all that new. I don't see the courts stepping into this type of minutiae in labour policy, despite its willingness to intervene when labour legislation goes too far.

Never say never, I suppose. I got it wrong on Mounted Police and Meredith, as I mentioned last time, and I'm sure there are union-side lawyers chewing over how to use those decisions to their client's best interests. But I don't think we're looking at a wholesale judicial reconstruction of our labour law in the wake of SFL, and that's why I suggested that the ramifications of SFL will be somewhat limited, especially outside the public sector.

So with all that in mind, why, I wondered, is LabourWatch so angry? What was I missing?

It took a conversation with my colleague Professor Ken Norman to make things fall into place. Ken commented that he figured SFL meant that U.S.-style so-called "right-to-work" legislation, and the kind of anti-labour efforts that we saw in Wisconsin a few years ago, would now have more trouble crossing the U.S. border. ("Right-to-work", by the way, has precious little to do with workers' rights and everything to do with preventing meaningful collective bargaining, as we'll see.)

The Supreme Court's been pretty consistent at upholding the compromises and trade-offs inherent in our labour law - sometimes only barely, sometimes for different reasons within the same judgment,  but pretty consistently. In Lavigne v. OPSEU, the Court  upheld the "Rand Formula" - mandatory payment of union dues by those covered by a collective agreement. In RWDSU v. Pepsi-Cola, it recognized the importance of picket lines but also set guidelines around what kind of behaviour on the part of strikers was impermissible. In R. v. Advance Cutting and Coring, it upheld the ability of the Quebec government to require mandatory membership in one of five unions in the construction industry.  In Bernard v. Canada, the Court upheld the right of  a union to obtain contact information for its members so that it could properly represent them.

Much of this came about because of a recognition by the Court of the trade-offs within Canadian labour law. In every Canadian jurisdiction, when a majority of workers within a proper bargaining unit elect to certify a union as their bargaining agent, that union is the only one with rights to represent that bargaining unit. As a result, the union has a duty to "fairly represent" all workers within that unit - whether they voted for the union or not, whether they come to union meetings or not, whether they try to decertify their workplace or not. And because a union has that statutory duty, the trade-offs such as mandatory union dues and provision of contact information are necessary to fulfill it.


And there's the rub. LabourWatch and its funders and members are all about right-to-work laws. Mr. Mortimer was very clear on that during his interview - right-to-work legislation like they have in many U.S. states was the answer to all our labour woes, but (he complained) no politician seemed willing to take that step (other than perhaps characters like former Ontario Tory leader Tim Hudak or the Wild Rose Alliance in Alberta). LabourWatch desperately wants American-style right-to-work laws where workers who are covered by collective agreements don't have to pay union dues.

But here's the problem. Under many right-to-work schemes (if not all, because this is about weakening workers' bargaining power, remember?) those not paying dues still benefit from the collective agreement, and this creates a huge "free rider" problem within the bargaining unit. And under such schemes the union often still retains a duty to fairly represent non-members and non-dues-paying workers. But by allowing and, indeed, encouraging free riders, you're thereby reducing the ability of unions to pay staff, hire lawyers, pay strike pay, etc., which in turn makes those workers who do become members or pay dues see less value for their money, which encourages them to decertify, and so on. Groups like LabourWatch know this.

There are things to dislike about our current system, and you don't need to be anti-union to feel that way. There have been a number of union-friendly voices who are critical of our current model and have suggested reform. But just cutting out one part of it, as LabourWatch suggests - one part that helps fuel the "engine" of the system, at that - isn't the answer. While these moves are often dressed up in high-sounding language like "employee choice" or, indeed, "right to work" itself, it's really about weakening unions - without, I hasten to add, changing anything else in the legal regime. So let's be clear: just slapping a "right-to-work" amendment to the existing system is a clear signal that you're not interested in "balance".

But SFL v. Saskatchewan, taken with the January 16th Mounted Police Association case, has  established (suggested Ken, and I agree with him) that implementing right-to-work legislation won't be easy in Canada. You can't arbitrarily declare that workers can't have independent union (Mounted Police Association). You can't strip unions of their ability to represent their members or to collectively bargain (which is what right-to-work would do) (SFL v. Saskatchewan). You can't impose arbitrary, one-sided amendments; you need to consider what workers are gaining, and what they're losing, and you need to respect.the workers' constitutional labour rights.

And I think that's why this case annoyed John Mortimer so much. There'll be no overturning Lavigne v. OPSEU now. No wonder LabourWatch is grouchy.

For my part, when I was talking about the limited impact of SFL, I was thinking purely in terms of using SFL v. Saskatchewan as a "sword" - to try to challenge existing laws. I didn't really think of its uses as a "shield" - trying to defend against American-style labour laws or against attempts to turn our provinces into Scott Walker's Wisconsin. So maybe SFL's ramifications are more significant than I thought.

...Unless, of course, a government implements such legislation, but insulates it from constitutional review by using the "notwithstanding clause" in s. 33 of the Charter. But that's a (more timely) discussion for next time!